The parade was a lot of fun, thanks to everyone that helped out and was involved!

The 146.90 repeater has been plagued with problems for quite some time. Recently thanks to a grant the club received we were able to replace several key components and alleviate almost all of the old problems that have been around for years.

The original Kenwood TKR-750 VHF repeater was found to be damaged and was only able to output around 20 watts on high instead of the 50 watts it should be capable of. This problem combined with a duplexer that was physically damaged, possibly by lightning, we were only seeing a mere 8-12 watts out of the duplexer. Inside one of the cavities the adjustment rod had become unattached from the tuning rod. We attempted to repair this but later found that the beryllium material inside the tuning shaft had also been damaged as well.

The repeater has since been replaced with a Yaesu DR1-X that is operating in both analog FM and C4FM digital modes. The duplexer was replaced with a brand new Telewave 4 cavity model since the old duplexer could not be repaired or tuned. The feed line and antenna were also checked. After the upgrade the repeater’s coverage expanded greatly and is now covering the majority of Jackson County and being used and heard in two other states and at least 9 other counties. Below are the before and after simulations of the repeater’s coverage. The current simulation is very much on par with real-world tests and reports.

Shortly after completing the new hardware replacement JCAR has installed internet at the site to facilitate the return of Echolink, IRLP, and other internet linking capabilities. Along with the internet Jackson County now has an APRS Digipeater and iGate once again running under the JCAR callsign K4SCO. Currently work is underway to add an Arcom RC210 controller to the repeater which will allow the addition of the internet and VoIP services along with RF linking to other sites and a remote base radio.

I finally had a chance to open up the 147.36 repeater’s power supply that failed a couple of weeks ago and didn’t have to look far for the reason of the failure. The cause is still undetermined but the damage is easy to spot. The power supply was still functioning and could support the repeater however when the link radio and UHF amp were brought up it couldn’t handle it. ~K4NHA 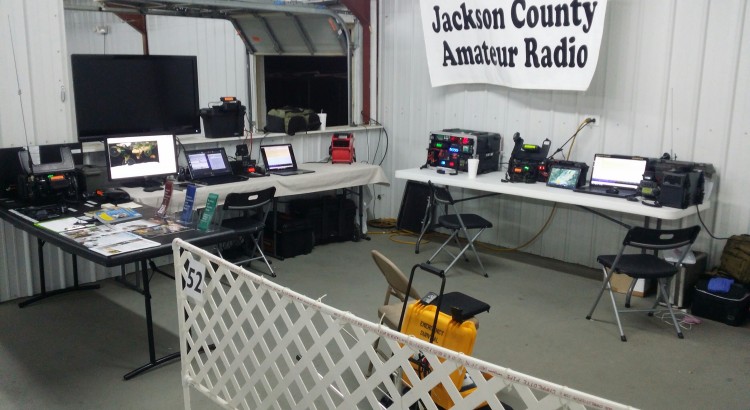 The annual Jackson County Fair is coming up, September 6th through the 10th at the VFW Fairgrounds in Scottsboro Alabama. Be sure to come by our booth and check out what’s happening in Amateur Radio and Emergency Communications! If you are interested in becoming a HAM we’ll have all the materials necessary to help you get your license and get on the air! Check out our Get Licensed! page for more details and enjoy some pictures from last year.

ARES Meetings are held on the fourth Thursday of each month at 6:00pm at the EMA Emergency Operations Center in the Jackson County Courthouse basement. All HAMs and persons interested in Emergency Communications are invited to attend.

Several members gathered to takedown at tower that will soon be installed at it’s new home, Craig K4MCL’s house. As always the star of the day was the climber, KK4UWF Brad Ivey. In attendance were KK4UWF Brad and his daughter Marley, K4MCL Craig, K4FUZ Paul, KB4RMA Richard, and K4NHA Brad.

Click on an image to see a larger version.